Have a Wall Street Journal subscription? Click here to read the article.

For the second time in less than a year, a study of common sunscreen ingredients has established that the chemicals are absorbed into the bloodstream at concentrations far greater than the Food and Drug Administration’s safety threshold.

According to the FDA, if active ingredients are found in the blood at a level of 0.5 nanograms per milliliter or higher, they should be analyzed to determine whether they increase the risk of cancer, birth defects or other adverse effects.

The maximum concentration of the six chemicals examined most recently by the FDA ranged from 3.3 nanograms per milliliter to 258.1, depending on the chemical and whether it was applied to the skin in the form of a lotion or spray.

For comparison, a concentration of 4 nanograms per milliliter of THC, the compound in marijuana that gets you high, corresponds to a blood alcohol content of 0.04% by weight—about what a person weighing 180 pounds would register after drinking two beers.

The FDA study, which was published in January in the peer-reviewed Journal of the American Medical Association, examined avobenzone, oxybenzone, octocrylene, homosalate, octisalate and octinoxate—six of the most commonly used active ingredients in sunscreen.

Previous studies have indicated a possible association between some of the chemicals and health risks such as endocrine disruption and reproductive harm, but no comprehensive safety data are available. 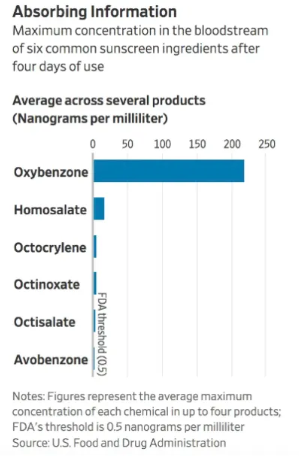 A proposed FDA rule, which was expected to be finalized last November, would have required the industry to complete additional testing of up to a dozen chemicals to make sure sunscreens using them are safe.

But the proposal was shelved in March when President Trump signed the Coronavirus Aid, Relief and Economic Security Act into law.

The Cares Act overhauled how over-the-counter drugs, including sunscreens, are regulated, and it retained the 1999 sunscreen rule, which says the active ingredients currently on the market are safe and effective.

The FDA cautioned that the results of its recent studies don’t indicate individuals should abandon sunscreens, which have been demonstrated to protect against skin cancer and other harmful effects of ultraviolet radiation.

But consumers do have a choice about what kind of product to use.

There are two varieties of active sunscreen ingredients—mineral and chemical.

The FDA’s 2019 proposed rule recognized the minerals zinc oxide and titanium dioxide as safe and effective. It withheld that designation from PABA and trolamine salicylate, two chemicals that are now rarely, if ever, used in sunscreens. And it said there was too little information to determine whether 12 other chemicals are safe, including the six tested most recently by the FDA.

In the FDA’s clinical trial of those ingredients, 48 healthy participants were randomly assigned to use one of four sunscreen products. The formulations included lotions and several kinds of spray.

Participants applied the sunscreens to 75% of their bodies once on the first day and four times on days two through four, the final day of application. The researchers collected 34 four blood samples over 21 days from each participant.

According to the FDA, the Cares Act requires the agency to propose a revised sunscreen order by Sept. 27, 2021.

What will happen after that is unclear.

A spokeswoman for the Personal Care Products Council, a national trade association, said: “There will be no deadline for FDA to issue a final order, but if and when such an order is issued, it may not take effect for at least one year after the proposed administrative order.”

In the meantime, consumers who wish to find out more about their sunscreens can consult the website of the Environmental Working Group, a nonprofit research organization that rates products.

EWG has assessed more than 700 currently available beach and sport sunscreens and found that only about a quarter of the products offer adequate protection and don’t contain concerning ingredients.

The six chemicals studied by the FDA are found in about half the products reviewed by EWG, which advises consumers to choose sunscreens made with zinc oxide or titanium dioxide.

“Ultimately, it comes back to concern over exposure to the sun,” said David Andrews, a senior scientist with the group. “We try to make sense of this space.”